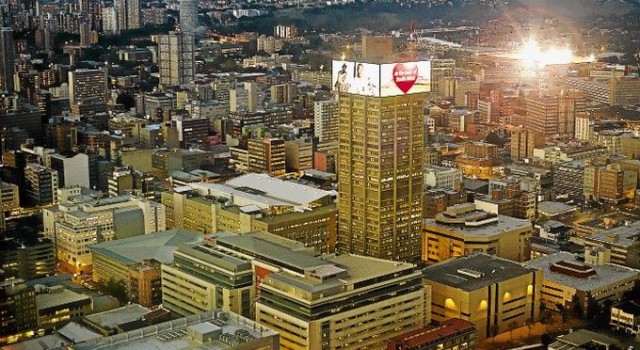 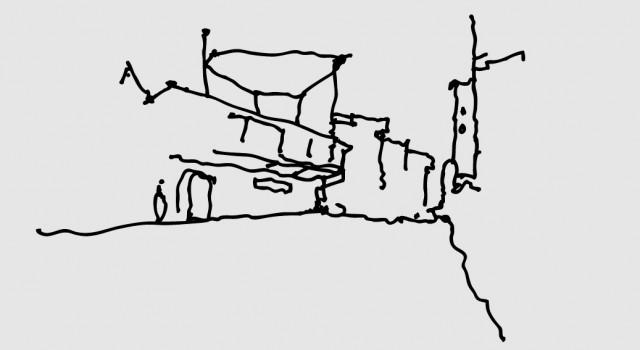 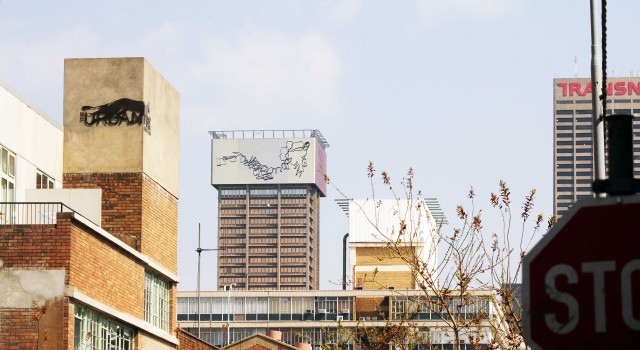 During Maboneng Art Week 2014, the Absa Lumen Display showcased artwork of artists from Maboneng and surrounding areas. The display ran sporadically throughout the week of Monday 18th – Sunday 24th August 2014.

The Absa Lumen featured three inner city based artists for the duration of Maboneng Art Week. The project’s focus is on selecting artists who live and work in the inner city and to celebrate those who are pioneers in creating relevant commentary around the various idiosyncrasies that exist in the Johannesburg CBD.

The selected artists were Lorenzo Nassimbeni, Senzo Shabangu and Stephen Hobbs. All three artist’s work deal with the city and their experience of living in such a complex space. Their concerns vary from the unseen history to be discovered, the unique power plays that have to take place in order to function in such a space and the commonplace and mundane elements that are dealt with on a day to day basis.

Ultimately the display of artist’s work on the Absa Lumen provides an opportunity to support such artists and to showcase the work of those who are working in the built environment; whether the focus is on the buildings or the people that occupy the space.

Walking past the Craftmen’s Ship

Hobbs preoccupation with the tactical and illusionary side of warfare is explored both in his artistic reading of the Apartheid planned city; designed around inclusion, exclusion, frontiers and non zones. And in the role that so many artists and designers have played in creating deception in the battlefield.

In recent years this has lead to painting commissions where his own Dazzle camouflage – a zebra-like pattern used particularly on gunships in the early 1900s to fragment the visual field of enemy sites in combat situations – is as much disruptive as it is spectacular in its manipulation of the planes and fields of a building.

More specifically Hobbs’ current commission to Dazzle The Craftsmen’s Ship residential development in Maboneng, including landscaping and pool design for the interior, has had a strong influence on the architectural progress of this new build.

For the ABSA screen Hobbs’ current dazzle painting on The Craftmen’s ship is animated using a kaleidoscopic filter, which accentuates and mirrors the various black white and grey tones of the painting, and abstracts elements of the surrounding landscape.

Diagonal and Stair to Imagined City

In this projection, architect and artist Lorenzo Nassimbeni shows 2 artworks. The artworks are entitled Diagonal and Stair to Imagined City. Diagonal is an illustration from a series entitled Urban Moments commissioned by Architecture and Urbanism practice, UrbanWorks. The illustration represents an iconic view of Diagonal Street, looking northwards to the old Johannesburg Stock Exchange building, affectionately referred to as the ‘Diamond’ building. It captures an ‘urban moment’ in the context of the city – alluding to Diagonal Street as one of the 3 important lines in the urban landscape which formed what was known as the ‘Uitvalgrond’. Translated to ‘leftover land’ the space was delineated by the 3 farms of Braamfontein, Doornfontein and Turffontein.

Comparatively, the other illustration, Stair to Imagined City is inspired by the subterranean architecture of the Cradle of Humankind, just north of the Johannesburg. The Cradle of Humankind is widely regarded as one of the worlds most significant sites of paleontological discovery. The drawing was created in the  ‘Wonder cave’ and traces the passage up a natural stairway, culminating in a rock formation resembling a sculptural ‘Madonna.’ The illustration was created during a drawing workshop entitled Drawing on Origins, hosted by the NIROX Foundation and the Gauteng Institute for Architecture (GIFA), and was curated by architects Elena Rocchi and Dieter Brandt. The workshop investigated the relationship between the disciplines of paleontology and architecture. The workshop featured a trip into the field by renowned paleontologist Professor Lee Berger, to the site of his recent discovery of Australopithecus sediba.

Shabangu is a firm believer in community work. Among many other projects, he initiated the Non Profit Organisation, Makhekhe Mshini Youth Facility Management (MMYFM), near his home-town. The project hosts netball and soccer tournaments for the Mpumalanga youth. Printmaking (silkscreen) workshops are held once a year. In 2008, Shabangu’s work was chosen to represent the Many Voices, One Movement Global Conference at the O.R Tambo Airport. As part of the conference, which looked at poverty in Africa, Shabangu produced an edition of 63 linocut prints for the conference attendees. Shabangu’s work was also selected to form part of the advertising for the World Art Summit at Museum Africa in 2009. Early in 2010, Senzo Shabangu was the recipient of the David Koloane Award. As part of the award, he engaged in a four month residency at the Bag Factory, under the mentorship of prestigious artists David Koloane and Pat Maut-loa. During the residency, Shabangu worked with resident artists from around the world. 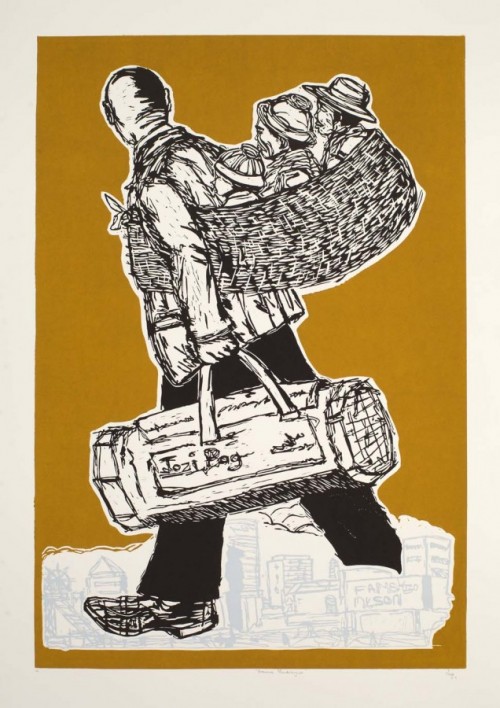 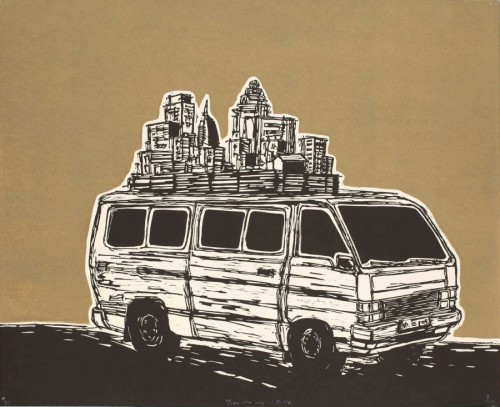 From the City of Gold II 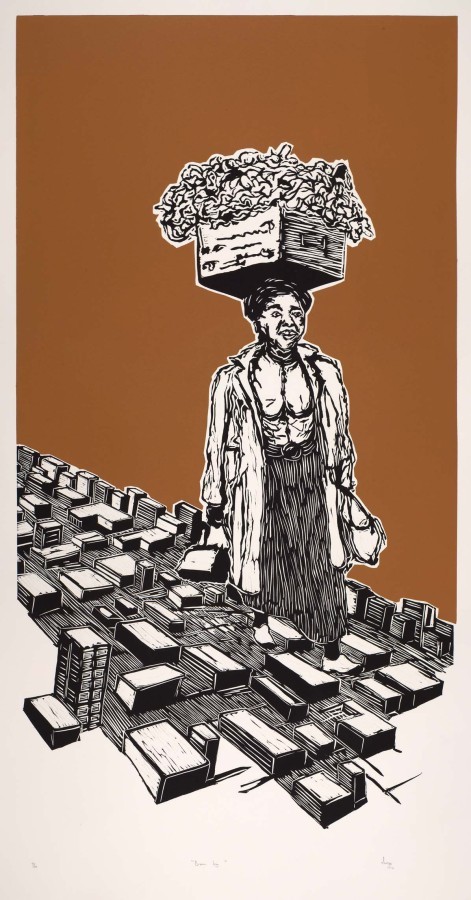 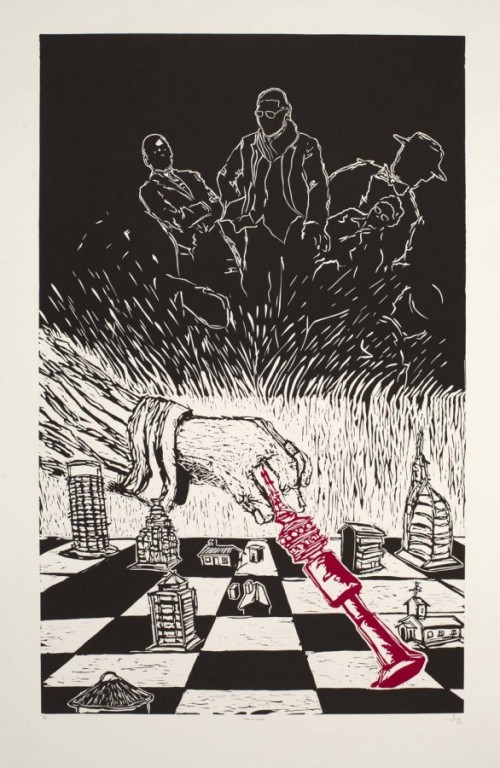 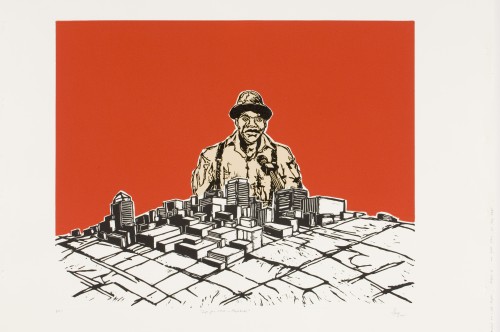