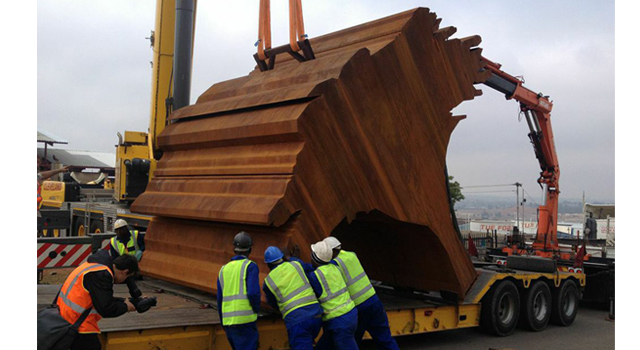 As part of FNB’s urban upgrade project at BankCity in Johannesburg, a series of sculptures by Sean Slemon were commissioned and installed in 2014.

Parts & Labour developed the public art brief for the precinct, managed the sculpture fabrication and installation of the works. 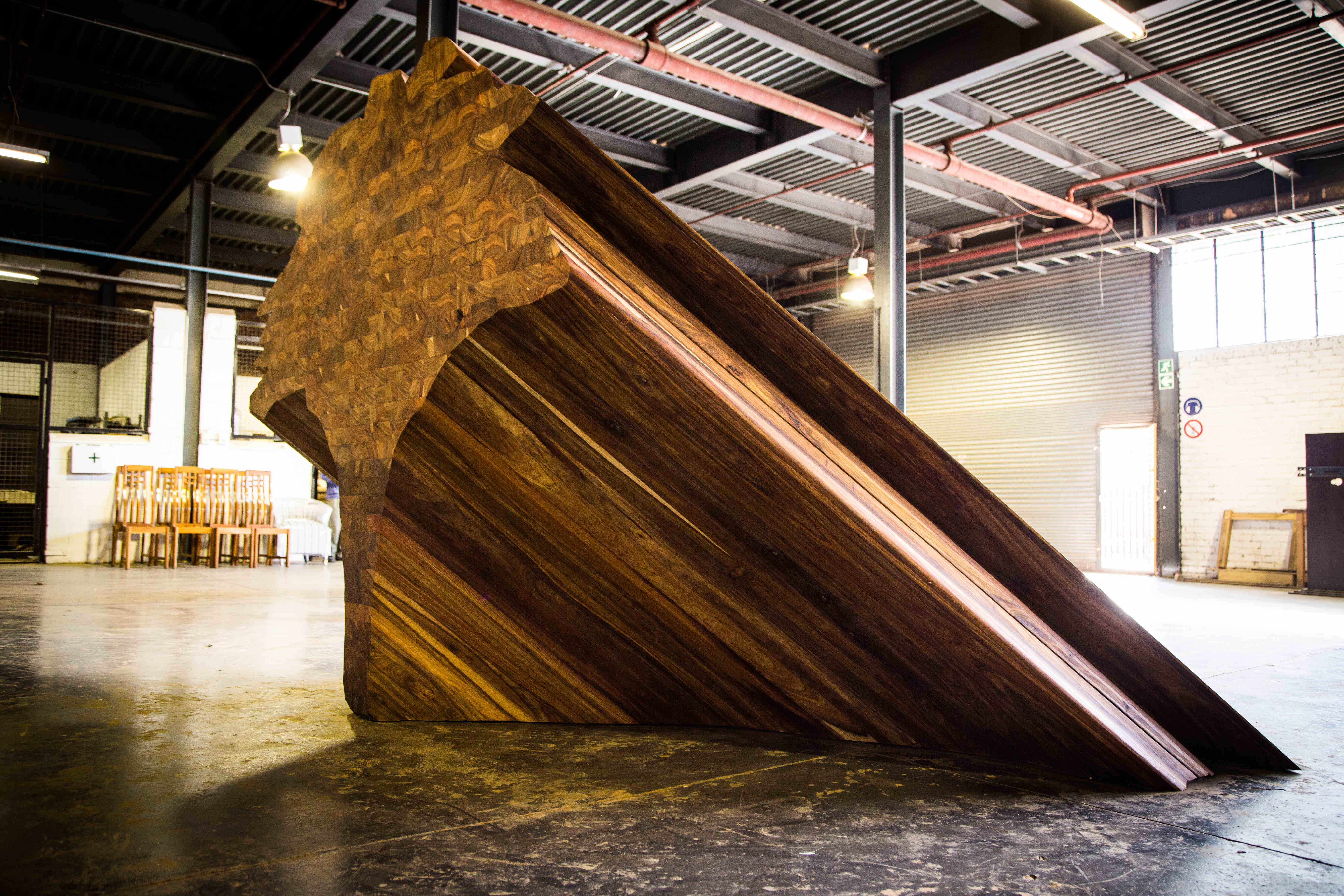 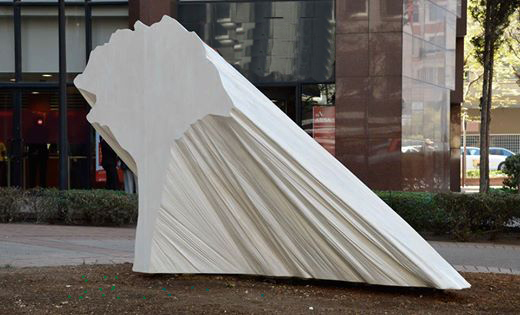 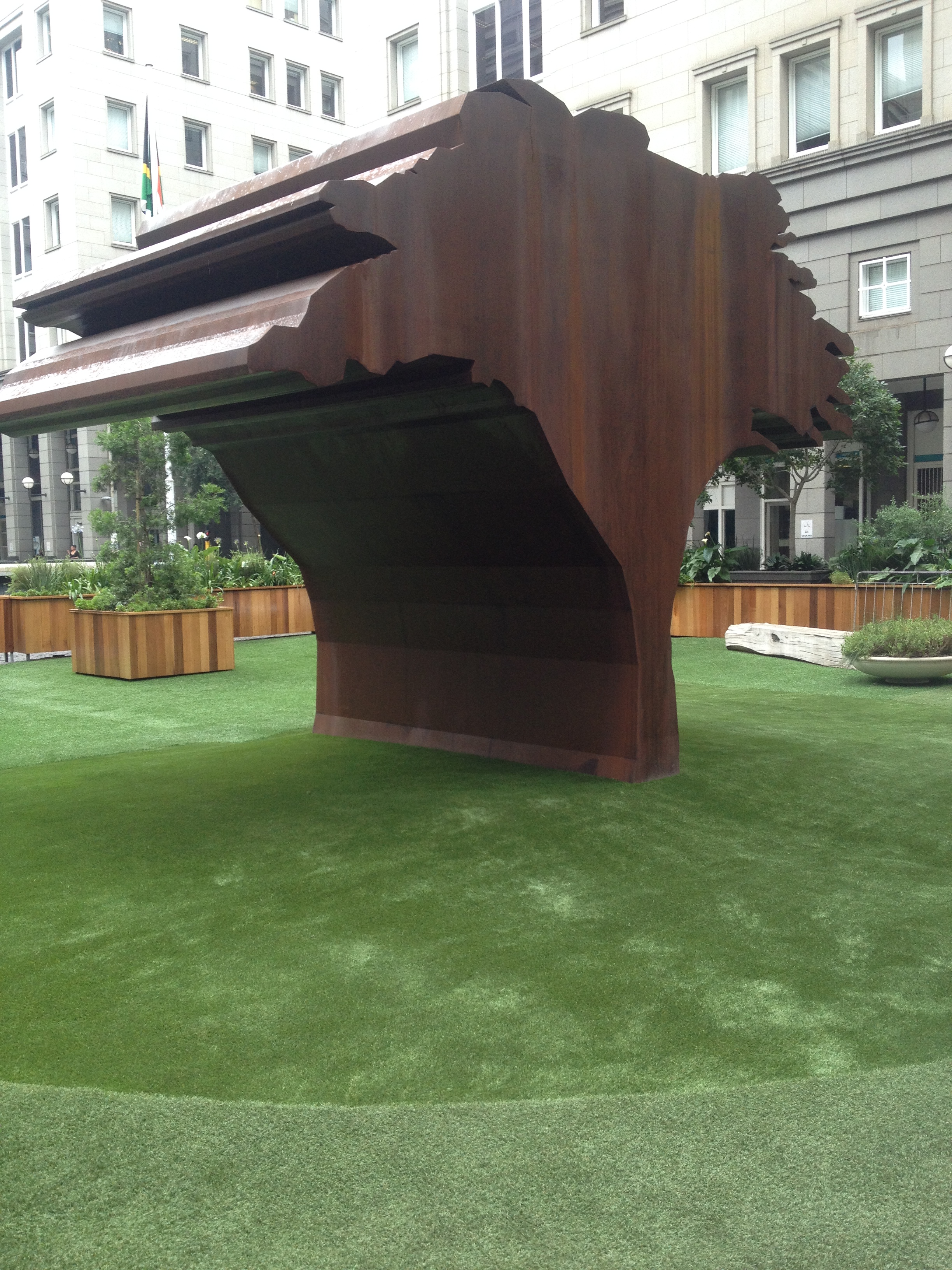 For more information on the project please follow the FNB Blog :

City dwellers and the business community in Johannesburg were recently able to witness the incredible sight of a six-ton steel sculpture being installed at the BankCity Piazza, as the Tree Sculpture Project nears its final phase.

The idea behind the commission was to activate the urban spaces surrounding BankCity Piazza by introducing an innovative and creative ‘urban savannah’ to support Johannesburg’s inner city rejuvenation.  To this end, FNB commissioned the project and invited artists to submit their interpretations of the brief: to design a public sculpture or group of sculptures that are a visual representation of the tree in FNB’s logo, symbolic of being proudly South Africa, providing shade and protection, firmly rooted in the African soil.

For Sean Slemon, the appointed artist, the sculptures that form the trees and the shadows they cast excelled in meeting the requirements of the brief, bringing FNB’s logo to life in the interpretation of the brief.

Mosunyana, the principal piece, is located on the main Piazza between 3 and 4 First Place at BankCity.  Slemon began by working with John Munday Engineering, and later, precision engineers JP Engineering, to get the design laser-cut from sheet metal: forty-six bent pieces that made up the side panel of the sculpture and nine sheets of steel for each rib of the tree. The metal was then sent to Estee Automation to assemble the pieces and reinforce the structure by welding the body of the work from the inside.

The steel bending and laser cutting by JP Engineering was no easy task, and Slemon described a few complications as a nationwide steel strike delayed the work.  However, Sean said this actually worked in his favour since it allowed him to review and refine the initial drawings, allowing a much more complex work to emerge.

Interpreting the artistic vision through the medium of steel, Brendan Copestake, Arts Project Manager of Parts and Labour, described the finish of the sculpture: ‘We are going to be rusting the work.  It gives it a great texture, and the rust texture is going to be that of tree bark – it’s alive, it’s going to continually be darkening throughout the course of its life.’

Asked whether the sculptures turned out according to his expectations, Slemon responded, ‘Yes absolutely. I am happy with all of them, considering this is my first time producing works on this scale. Mari and I spoke on the phone after Mosunyana was installed, and she said to me ‘Sean, it looks exactly like the drawing!’

For Slemon, he found Mosunyana ‘achieved the correct scale in terms of the works position and context’ but he also described the practical concerns:

‘I was always concerned about competing with the surrounding buildings, and I also wanted to echo the scale of a real tree of course, and I think I have managed to achieve both of these things. We spent a lot of time making sure the scale and size were going to work, and I was nervous about it, which I suppose is a good thing, as it kept me on my toes with regard to that. There were also some practical issues that influenced the scale. Initially I had drawn the work up to be 4.2m deep… however three factors came into play: one was cost, the second was the availability of a special order steel plate size in 3.6m, and the third was that anything over 3.6m in width requires a different kind of Abnormal Load transport permit, which is a lot more costly. I am very happy with the depth now, and sometimes you have to allow changes to occur with this kind of thing – you have to be flexible to some degree.‘

Working to international standards, complex both in terms of the nature of the design and the fabrication, Slemon worked on the remaining four sculptures with the same passion and enthusiasm as the main piece. IsiThunzi, the ‘Shadow Tree’ sculpture, was created out of layers of laminated wood to form the shadow of the tree. IsiThunzi is installed at FNB’s Fairlands offices in the lobby, and Slemon states that ‘this work has a resonance for me in a very different manner to Mosunyana’.

UmThunzi, at 1066 Pritchard, is another work Sean says he has enjoyed immensely, partly because he was involved with not only the creative side – the concept and drawings – but also the physical process, ‘with assistance of course!’

He added, ‘It has a much more organic feel to it – there is a real difference in feel to something when it is hand made, and while the other two works are great there is a much more flexible feel to this one.’

Asked whether he was concerned about the installation and how he was involved in the process, he responded, ‘I was most concerned about the installation of the fiberglass work- UmThunzi at 1066. This was a little nerve wracking, probably because it was the first one to go in.  While it is the smallest of the three, I suppose it had also become my baby as I had my own hand in it as well. When the works are built by others, you of course feel slightly less possessive about them as an artist.’

Mosunyana, the principal installation, now nestles among the tall BankCity buildings and cityscape of Johannesburg, creating a fascinating and invigorating environment, and giving real meaning to the concept of public art.  Asked to describe how he feels about the outcome of the project as a whole and the end result, Sean said, ‘I’m excited about the project and I’m very proud to have been able to build these works. I think they will become assets for the City. This is very important, both for me and for FNB. I look forward to seeing how the works settle into their new homes and how they prove their timeless quality. This is another important factor for me – you cannot make something like this that goes out of style in thirty years time, it has to be significant forever, and I hope I can achieve this. But of course only time will tell.

Commenting on the feedback so far, Sean says, ‘… so far I have had great feedback. I’m excited for the [sculptures] to be out in the public and to start claiming their space.’